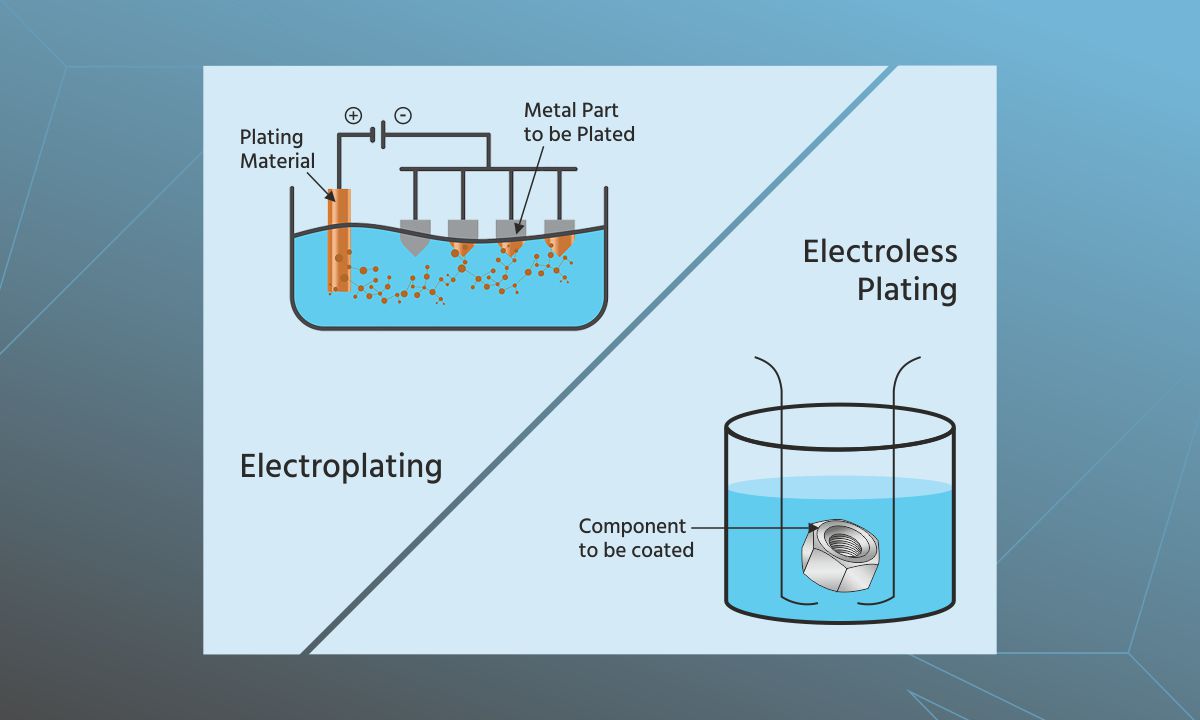 Posted on in
Blogs, Chemical

Metal plating has for centuries been a popular method to provide objects or machine parts with additional properties of specific metals for desired results. Plating could be used for a wide variety of applications ranging from giving a metallic look to objects for aesthetic reasons to altering the physical properties of a component for better performance. Depending on the application goal, metals or metal alloys such as gold, silver, copper-tin, aluminium, cadmium, zinc, chromium, or nickel are used in the plating process. In the case of mechanical components, metal plating is done to improve their corrosion resistance, reduce friction, and increase their durability and strength.

Alloys that combine two different metals can bring added advantages while helping reduce costs without compromising quality. For instance, using a zinc-nickel alloy confers the best of both metals on the plated component. The alloy improves corrosion resistance significantly, preventing the formation of white rust for up to 500 hours, and keeping red rust at bay for up to 1000 hours during salt-spraying testing.

The metal plating process is of two different types: Electroplating and electroless plating. While electroplating requires electrical current, electroless plating involves dipping the component in a liquid solution to bring about the desired reaction. Both the processes have their own pros and cons. The choice of plating method is determined by the application type of the component, and costs.

This process uses electrical current to achieve uniform metal plating. The current reduces dissolved metal cations that are nothing but positively charged ions. Electrodes are the key components of the electroplating process. The material to be plated is also a cathode which is negatively charged whereas the metal which is to be coated on the object is the positively charged anode. Both these components are immersed into an electrolyte solution comprised of metal salts and other ions to facilitate the proper circulation of electrical current. The current then leads metal cations to form a thin coating onto the object to be plated. This process is called electrodeposition.

In electroplating, an external power source must supply electrical current to the anode to oxidise and dissolve metal atoms into the electrolyte solution. These dissolved ions then go on to plate the object. The ions present in the electrolyte are replenished throughout the process by the anode which is made up of the metal used for plating the object. At the end of the process, the chemical properties of the component. are altered. Its resistance to corrosion improves, dulling is prevented, increasing the component’s durability, and it gains added tensile strength. A part that could not perform under pressure might be able to do so after plating.

Electroplating is the best method to achieve a uniform thickness of the coating. Despite a high consumption of power, it is an economical method due to the high volume of components to be plated. Other benefits of this process include uniform surface abrasion and building thickness of the metal substrate. Electroplating enhances the surface of components, making them ideal for plaining.

The electroless method uses an auto-catalytic chemical reaction and not an electrical current to plate components. This process involves dipping the component in a liquid to induce multiple reactions at once. Electroless plating does not need two electrodes and an external power source. It uses one electrode and relies purely on chemical methods. This also makes electroless plating less costly.

Electroless plating uses a reducing agent for plating. Nickel tends to be the most commonly used metal in this process. However, other metals such as copper, silver and gold can also be plated onto components using electroless plating. Since this method does not need electrolyte baths and external application of current, it allows more flexibility in the shape and size of objects to be plated and can deliver varying levels of finishing brightness in the coating. On the downside, however, electroless plating tends to be much slower and cannot deliver the desired thickness of the coating that electroplating can.
It is still a very effective method to alter the physical and chemical properties of components with effective coating and improve their durability.

Selective plating or brush plating is a method related to electroplating. It is used when plating is needed in more localized areas of components.

The brush is a piece of stainless steel metal wrapped in cloth. It holds the plating solution and prevents the component from being plated from making direct contact. An operator does the localized plating with the brush using a low voltage current. Achieving uniform localized plating with a brush requires considerable skill. Brush plating enables specific sot plating which is useful mostly for purpose of repair and refurbishment of components. Whereas electroplating involves full component being given an electrolyte bath, brush plating applies the electrolyte plating solution to a targeted area and uses anode connected to the wire.

Brush plating uses a brush that is flexible and easy to maneuver brush attached to a power supply. This makes the process appear akin to welding in comparison with other electroplating methods. The slight difference between brush plating and full-fledge electroplating is that in brush plating, the anode is connected to a handle and wrapped in a cloth. The object to be plated is still the cathode. Moving anode over the cathode completes the circuit and enables electrolytes to be supplied continuously. An electrolyte is generally supplied by a pump or by dipping. The cloth works to absorb electrolytes in the brush plating process.

Brush plating is much more flexible than electrolyte baths as the equipment for localized plating is mobile. Brush plating can be done in any location ranging from onsite to customer location or your own workshop. It does not involve the risk of transporting heavy and delicate machinery for plating.

Brush plating reduces the need for machining as it enables the deposition of metal onto a component in thin layers. There are no limits to the thickness of plating that can be achieved by this method. Due to its compact equipment and precise procedure, brush plating is much faster than conventional electrolyte baths.

Selective plating allows plating of small spaces which need the very low volume of metal. These characteristics make it ideal for the repair and refurbishment of components.

Despite its compact size and accuracy, selective plating or brush plating is not as economical as traditional electroplating or electroless plating, both of which are economical due to the volume of material involved.

Unlike traditional electrolyte baths, selective plating is a more hands-on process that needs a skilled operator trained in brush plating.

Applications of selective or brush plating

Selective plating is used in a number of sectors from manufacturing to energy and aerospace. It is useful for repairing, refurbishment of components, and reduces downtime considerably by keeping critical machines functioning.

This method is often deployed to remove build up on surfaces such as essential bearings and bushings. Selective plating enables plating of localized areas with close tolerance and wall thickness. Unique advantages are also offered by some metals in applications such as adjoining parts in soldering and welding.

Metals that improve physical properties at joints can be brush plated to make soldering and welding easier. The process can also serve to increase the strength of the joints. Sometimes, the need is felt for enhanced conductivity only in certain parts of the component rather than the whole surface. Brush plating helps bring these properties to electrical components that rely on precious metals.

If the components have an odd shape or are too large in size, and heavy, they could be unsuitable for electrolyte baths. Brush plating can get these parts plated with speed and accuracy. Odd components that are used in critical applications can be made more flexible by changing their properties through brush plating.

Alloys and metals used in plating

A wide variety of metals are used in plating components using the electroplating, electroless plating or selective plating processes. Often, the type of metal to be used depends on the type of application. Be it giving a finished metallic look to improve aesthetics, or be it changing the chemical, physical and mechanical properties of a component for better performance under stress, each metal and alloy brings a specific set of advantages in plating.

Here are some of the important metals and alloys used in plating:

Gold: Gold plating is generally applied to small components due to the high price of the metal. Apart from jewellery, gold plating is applied to components such as connectors as gold has high electrical conductivity and resistance to oxidation. Gold remains a coveted metal due to its unique physical and mechanical properties and is much rarer than copper which also displays similar properties.

Silver: Silver also possess high electrical conductivity. It tends to be highly valued and is used mostly in jewellery and decorations. However, it can enhance the electrical conductivity of components. Even so, the benefits conferred by silver may not hold over the long term, and many other cheaper metals perform better than silver in a number of applications.

Copper: As opposed to gold or silver, lower cost and high electrical conductivity make copper as well as its alloys popular plating materials in various sectors of the industry. It is used widely in the manufacturing of circuit boards and electronic components. In addition to high corrosion resistance and heat transfer ability, copper also possesses a high plating efficiency. Even though stainless steel costs less than copper, its thermal conductivity is only 1/30 that of copper. This makes copper the metal of choice for heat transfer applications.

Nickel: Nickle is more commonly used in electroless plating. Many objects of everyday use such as kitchenware, plumbing fixtures, doorknobs etc. are plated with nickel. The popularity of many nickel alloys also makes the metal the most widely used in plating.

Chromium: Chromium can help reduce friction and improve resistance to corrosion. Apart from this, it is also used for decoration due to its shiny clean surface finish. Many components in the automobile sector are electroplated with chromium for decorative purposes.

Cadmium: Cadmium is used mostly to plate components that require enhanced paint adhesion. Apart from this, the metal also increases corrosion resistance and protects the components from wear and tear. Almost all conductive metals can be plated with chromium, making it a widely used metal in all sectors across the industry.